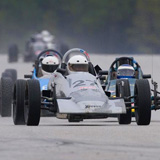 The best race tracks in the country are waiting for you. Getting started in SCCA Club Racing isn’t as hard as you think. The SCCA stages more than 300 Club Racing events each year for people just like you. Whether you want to be World Champion or just crave the wheel-to-wheel racing experience, it’s time for you to get started.

Hit the track at an SCCA drivers’ school, then experience the excitement of Regional racing, step up to National-level competition and strive for the pinnacle of amateur motorsports, the annual SCCA National Championship Runoffs.

SCCA Road Racing is generally organized at the regional level and CCR is part of South East Division of the SCCA. This Division has two excellent Division wide regional race series.

The SARRC series is the most successful regional race series in all of SCCA. Each year, the series has 25 races and over 4000 total entries. SARRC stands for the South Atlantic Road Racing Championship. The final SARRC race of the race season is at Roebling Road in October and is called the SIC or SARRC Invitational Challenge. As the name implies, this is an invitation only race. In order to be invited, a driver must enter three regular season SARRC races. Drivers may count their points for their best six regular season races toward the SARRC Championship. In addition, the points earned at the SIC count double and are added to the best six regular season races.

Our other Regional race series is ECR (Endurance Championship Race) and is limited only to Spec Miata, Showroom stock, SRF & IT classes. The series is similar to SARRC in that you count your best six regular season races and the double points for the Championship race which is scheduled the same weekend this year as the SIC. The Champions from all our Division series receive their awards at our Annual meeting and Awards banquet held in January each year at Jekyll Island, Ga.